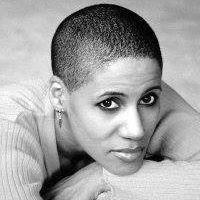 CG: Tell us about your play, please – its origins or inspirational source, a quick plot summary, its themes and what, if anything, you’re hoping will be a take-away for the audience.

SMS-M: Trick Church is a piece written in contemplation of what racism on the reverse would look like within the confines of a “real down” black community such as the one in which this play happens; the neighborhood I was raised in, in fact. I utilized characters in this neighborhood, along with their sensibilities, as I remembered them; the ways in which they sometimes quite brutally spoke about and treated themselves (black people), white people and the extreme differences blatantly showcased between the two in terms of equality across the societal board in the mid-‘70s. It stands as my examination in progress of the behavior of the descendants of a people who were stolen from their homeland by way of violence, brutality and greed, who were nurtured, generation after generation, in an environment of violence, brutality and greed on all sides, but who were and are yet expected to become something totally different from that socially. To my way of examination, what if we, as black descendants, are expected to behave ourselves so as not to harm or offend the original, generational aggressors? As though we are indeed ‘not human’. We don’t all play by those rules. In other words, no matter how you slice it or what you call it, we are all products of what we were raised to be and humanity has to swim mighty hard to make its way to the top. I don’t write to give people answers, or to say that I have any to give. I simply paint a picture, for whatever it is worth, to whomever outside of myself. I’m not really one for hoping or asking an audience to take anything away with them, though. If it speaks to someone, great.

CG: When did you start writing plays and why?

SMS-M: I started writing plays when I got accepted into New York University’s Tisch School of the Arts as an undergraduate. I always knew I would become a writer, but was not ever sure of how to go about it. Getting accepted into NYU literally on a dare became the forward-movement of my existence. Why do I write? Because it’s something I can do; something I have a talent and passion for. If I didn’t have the talent for it, I wouldn’t have wasted my time. In fact, during that very first introduction/orientation into Tisch’s undergraduate Dramatic Writing Department, we oh-so-lucky twenty or so students accepted into this brand new program in the ‘80s were all told that if we weren’t able to write, then they couldn’t teach us to write. We would never have been let into the building if we didn’t each have what it took to go some sort of literary distance.

CG: Do you write in other mediums?

SMS-M: Yes, I’ve dabbled in screenplays, I write grants for organizations when the opportunity arises; proposals and articles for museum publications. I’ve also worked as an editor.

CG: Do you have formal training?

SMS-M: Sure. I have an MFA in Dramatic Writing from Tisch and an MA in Museum Studies from Johns Hopkins University specializing in Development and Grant Writing.

CG: Who is your favorite playwright – living or long gone?

CG: Why are early readings with professional directors and actors beneficial to you and your work?

SMS-M: Because of the way my plays are written, I find it stimulating to come across both directors as well as actors who ‘get it’, so to speak. They get it and they know how to run with it. Israel Hicks, who was my dear friend and mentor for many years, discovered me and directed my work whenever he could arrange it. I could put my words in his hands knowing that, with his Southern roots and immense talent, he knew what I was saying and how it should be delivered; how the lines should fall on the ears of the audience. Unfortunately, Israel passed away a few years ago, so I’m on the look-out for theatres and theatre professionals who are willing to take me and my work on. A local writer-in-residence thingie would be cool.

CG: Could you share your thoughts on Atlanta theatre from a writer’s perspective?

SMS- M: Well, I didn’t start out professionally on the scene here in Atlanta. I went straight to Denver Center, which is one of the twelve LORT theatres in the United States. I stress this because there is a difference between starting out having your work performed for little or no money, or just for the love of the game, and just being outright highly paid for, what, six weeks of work, from jump street. There was a vast difference for me. I didn’t develop a local loyalty in that way. But, because I do come from a creative family (my aunt is Barbara Sullivan, who was a very strong force on the Atlanta arts scene for many years) and was practically raised in the world of dance because of my aunt’s influence, I was used to seeing local performing talent struggling to make ends meet here, and it didn’t look all that attractive. At this stage of the game, however, even after a few hit plays, two Master’s degrees and some awards under my belt, I have found it truly difficult to find a place to further develop here in Atlanta. Maybe it’s a money thing, and maybe it’s just that nobody gives a crap about what I’m saying or doing. At any rate, Edward Albee said the same thing when he lectured to my graduate class about his own work, so maybe I’m in good company. Is this a nurturing town for new work? Again, I don’t know. It all comes down to dollars and cents for most theatres anywhere; putting butts in the seats everywhere. Atlanta’s no different. Let’s face it, if a work can’t sell enough tickets, no matter how beautiful or moving the thing is or could be, it gets thrown out with the bath water, and there’s a strong possibility that no one will see it again; not performed ever. And then, you have the situation of dealing with 25 year olds coming straight out of Yale Drama into positions of making decisions as to what is worthy of being bothered with and what is not based strictly on what side of the bed he or she got up on that morning. I’m not saying that’s happening here in Atlanta, but I’ve definitely seen it with my own eyes elsewhere, so I may be getting off subject. Is this a nurturing town for new work? It could be, and I’d like to feel confident that I could send new, experimental work such as Trick Church out to local places and have it taken seriously simply because I’ve put the time in as an accomplished theatre professional over the years. We’ll see.

CG: How has Atlanta grown (or not) over the years for playwrights?

SSM-M: I have no idea. I’ve spent a great deal of my time raising two fantastic children into college, and I’m not known for biting my tongue. I think if you’re a favorite of some artistic director, you can consider yourself in a position of being nurtured and / or growing. Again, I can only speak from my personal experience.

CG: Do you feel that our theatre community serves as a launching pad for wider exposure?

SSM-M: Again, it could, but the dollars & cents of it all seems to be either the excuse or the, “it’s a damn shame”reason why very, very few theatres here seem to be taking chances on newer works that just might have the legs to go forward into the larger world if only somebody believed in that work outside of the immediate “dollars & cents” spec sheet. By “excuse” I mean, “We’ll just hide behind this WE AIN’T GOT NO MONEY logo to keep any and every one from wondering why we keep doing the same old chestnut plays year after year that have still and somehow managed to make money instead of taking a chance on new stuff.” Hey, you can do wonderful things with just risers on a stage instead of elaborate sets and whatnot so, that “WE AIN’T GOT NO MONEY” thing doesn’t always stand up. I’ve witnessed whole plays done in restaurants using the patrons as part of the piece. They didn’t even have to pay to use the space. I’ve seen plays performed on the steps on the New York City Library and the people were riveted. Again, didn’t even have to pay for the space. They didn’t make what you’d call money but, WOW, what an inclusive experience! The, “It’s a damn shame” reason goes hand-in-hand with the “WE AIN’T GOT NO MONEY” reasoning. There’s got to be a merging. If it doesn’t happen, the same old chestnuts will be coming to the theatre (and passing gas) instead of introducing new acorns into the fold with innovation. And I don’t mean hip-hop when I say that. Lorrr, if I see one more hip-hop play, I’m gonna walk through the theatre singing every Earth, Wind and Fire song I ever knew. And I’m not trying to downgrade the Atlanta theatre scene at all. I’d like to be more of a part of it. I just don’t have a lot of confidence in theatre overall these days; theatre across the nation. Not like I used to. I used to believe in theatre. That it could change things. When I saw that production of Purlie Victorious in 1975 in Piedmont Park with Samuel Jackson in the lead role, my life was changed forever; really. Now, I think that money rules the damn thing to the teeth. I’d adore to be proven wrong.

CG: Could you share three pieces of advice for early career writers?

SSM-M: Well, don’t do it because you want to get rich. I started out a dancer, but I didn’t have to dance, so I quit. I had to write, so I did. So, I do. Let your character and your personal integrity be seen and heard through your work. Don’t give it up to become what you believe an audience would have you (your work) to turn into. Believe in your own process. Take as long as you need to perfect every line so that you can defend every word to the death. You may be years working on one play. So be it.

For more information on the Threshold New Play Festival and for tickets, visit: www.actors-express.com/readings.

Clifton Guterman Tells All About Threshold Where No Intern Has Gone Before
404.607.SHOW (7469)