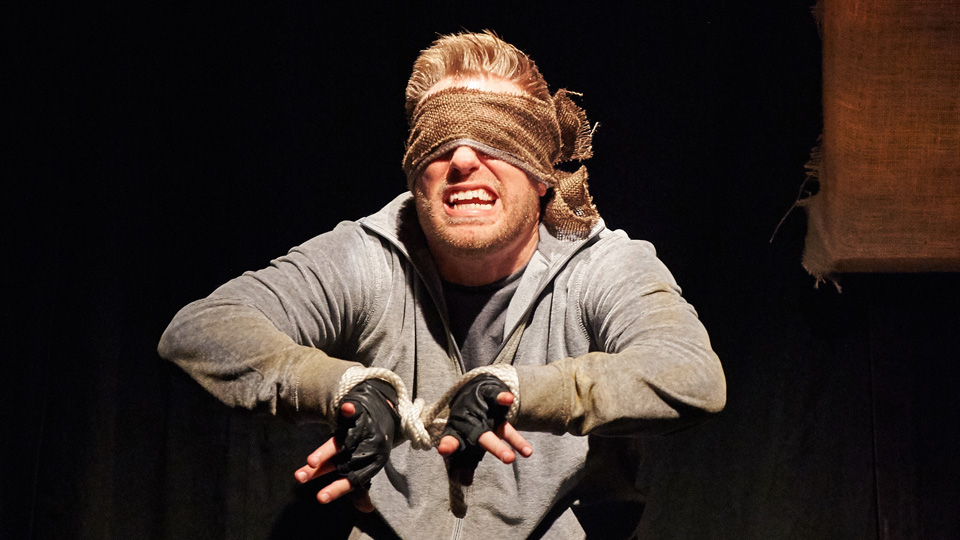 This is not your first time playing with Steve Yockey's unique dimensional characters. What do you find most challenging or most exciting about working in Yockey's world?

Each play has its challenges. Here's a challenge for several (but not all) of the Steve Yockey plays I've done.

Play on Words: Memorization. It went up the night Steve's parents came. I was the only one on stage.

Violet: The director told me to actually slap my scene partner. I was immature, so I was like, "YEAH! I'LL DO IT!" I cracked her in the ear a couple times. She's okay though. She's getting married soon.

Sleepy: I made a character's speech tempo really slow. Steve didn't like it; he thought it was bad for the rhythm. But he and Kate Warner let me do it and then people at Dad's Garage thought I was funny.

Cartoon: Physical fitness. I threw up in the corner the first day of rehearsal.

Tiger, Tiger: Steve gave me a three page monologue the Wednesday before Thanksgiving that needed to be ready on Saturday. I nailed it. Dropped, like, two lines.

Skin: Keeping my 'P' a safe distance from Alison Hasting's 'V' during the final scene. Kate Donadio and I won an award for kissing in that show.

Octopus: Staying healthy. Brian Crawford and I kept getting colds. We were fighting in water (in the play) during February and the heater in my car wasn't working. Brian always asked me for rides too.

Large Animal Games: I thought my character should be tan. I had a sunburned back for three weeks. You couldn't tell a difference in the front.

Wolves: Melissa Foulger had to help me understand how attractive I was. Which is a very vain sentence to write, but whatever, that was the challenge.

Pluto: Getting out of the deep sea diver suit while speaking; it's hard to walk and talk sometimes. Also, the difference between a 'Z' and an 'S' as pertaining to transitions in speeches.

Blackberry Winter: Conveying that the repeating first and third lines of the villanelle's opening tercets have distinct meanings each time.

If you were an animal what would you be?

Seriously? I don't know. An elephant. They're so big. Go check one out yourself if you haven't.

Blackberry Winter is a memory play. What is one theatrical memory that made a big impact on you?

I saw Further Than the Furthest Thing by Zinnie Harris at the Tricycle Theater in London. (Aren't I special?) There is a moment when an old woman drops an egg and then everyone in the audience dies. There's not even a light change or anything - that egg just meant so much we all thought the world would end.

Pluto, yo. Shouts out to Kathleen and Wyatt and the beautiful Steph-dawg.

Last show you were in?

What’s next on your agenda?

Charley's Aunt at Georgia Ensemble Theatre. It's strange; I'm doing British farces now and keeping it in my pants.