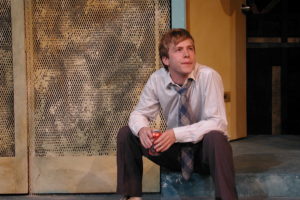 Jamie and Ste (short for Steve) are teenage neighbors in a working-class housing project in London. Jamie is bookish and shy while Ste is more athletic. Neither one has an ideal home life: Jamie's mother Sandra is bitter over her financial situation and her romantic life, but she's willing to settle for a bloke named Tony and cover up her disappointment with scathing humor; Ste's father and brother abuse him in the form of escalating domestic squabbles and actual beatings. After one such fight, Ste asks Sandra if he can stay at her house and she lets him and Jamie bunk together.

As their friendship grows, Jamie begins to realize he has stronger feelings for Ste, and one night, after Ste suffers a particularly bad beating, the two boys decide to experiment together. Both realizing they're gay, Ste and Jamie begin a tentative relationship. Soon, Sandra hears the rumor that her son's gay, and knowing that he's been having trouble in school, she confronts him and he admits the truth. Ste and Jamie's friend, Leah, is also in on the secret and she's supportive of them, probably because of her own outsider status as a Mama Cass worshipper. The play ends with the two boys feeling less alone in the world than before; they have each other, and even the bickering Sandra and Leah call a truce and accompany the boys in a slow dance for all their neighbors to see. 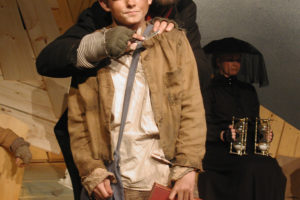 Lovemaking and undertaking are both major elements in Actor's Express' The Wooden Breeks, but in its simplest terms, the play is the tale of a quirky town. It unfolds as a hearthside story told by a cynical tinker (Theo Harness) to a much-abused orphan boy (Andrew Bracken), who find themselves both audience and participants in the tale's telling. The narrative self-consciousness is just one of The Wooden Breeks' heady, ambitious touches, not all of which catches fire.

Playwright Glen Berger places the action in Brood, a benighted British village populated by Dickensian archetypes. Its citizens include a mousy vicar (Bill Murphey) desperately in love with a perpetually mourning widow (Joanna Daniel) who has a comic fascination with suicide. The town's bullying gravedigger (Matt Stanton) moonlights as a grave robber who wears the finery of the disinterred, while a pair of facile lovers (Jessie Andary and Nathan Mobley) coos romantic trifles at one another.

Things are bad in Brood in the best of times, but they get worse when the poverty-stricken town gets caught up in the 19th-century phobia of premature burial. The fear is stoked as a ploy to sell special coffins outfitted with bells to be rung by "corpses" who are not quite dead yet. The townsfolk are shocked to learn that the coffin saleslady, Miss Spoon (Jennifer Crumbley-Bonder), is a dead ringer -- pun intended -- for the orphan's late mother.

Miss Spoon's strongest and strangest sales pitch is to the lighthouse-keeper (Daniel May), a young scholar who never sleeps or goes outdoors and spends all his time with his books. But Miss Spoon begins sending him beguiling letters that inject sex into his scholarship and derail his train of thought.

The title draws on an obsolete slang term for a coffin, and Berger employs songs, rhymed verse and antiquated turns of phrase reminiscent of Naomi Wallace or Caryl Churchill. A complex work of worthy ambition, The Wooden Breeks attempts much with its poetry and theatricality, but at times the grasp is not equal to the reach.

Alva Rogers wrote the doll plays to pay tribute to a real woman named Lenon Hoyte, aka "Aunt Len" (Mitchell-Leon), who devoted her life to collecting thousands of rare dolls and maintaining a Harlem doll museum. The real Aunt Len died in 1999, and the doll plays imagines the elderly woman on her death bed, her life flashing before her eyes -- only acted out by her dolls.

The play offers a sequence of vignettes, with some dolls telling Aunt Len's life story, others relating their history as toys and collectibles. A French dress-up doll (Anne Towns) recalls her past as a cast-off plaything, while a Grace Kelly doll (Lane Carlock) describes how the movie star had to abandon Hollywood for life as a princess. 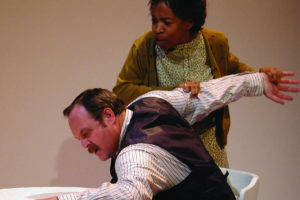 Shelita Burns (Donna Biscoe), who edits a line of reprinted "lost" African-American classics, is the protagonist. Shelita has found a surprise best seller with the memoir Bee-luther-hatchee (an expression referring to the place you go "after hell"), and we get glimpses of the work in speeches by author Libby Price (Mitchell-Leon) describing her life in the Jim Crow South.

But despite being a successful, award-winning author, Libby remains an enigma, never photographed or interviewed, and even Shelita has never met her in person. Shelita dedicates herself to tracking Libby down, and after several blind alleys discovers in a Charlotte hotel room that the author is not at all whom she expected. The playwright provides a juicy mystery in the first act that sets up a provocative debate in the second, wrestling with such matters as authenticity, entitlement, fraud and "Why is the writer more important than the words?" 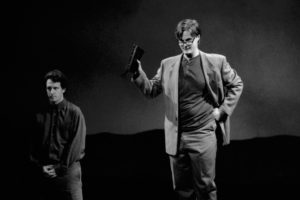